#MattsMovieMania Out of the Furnace 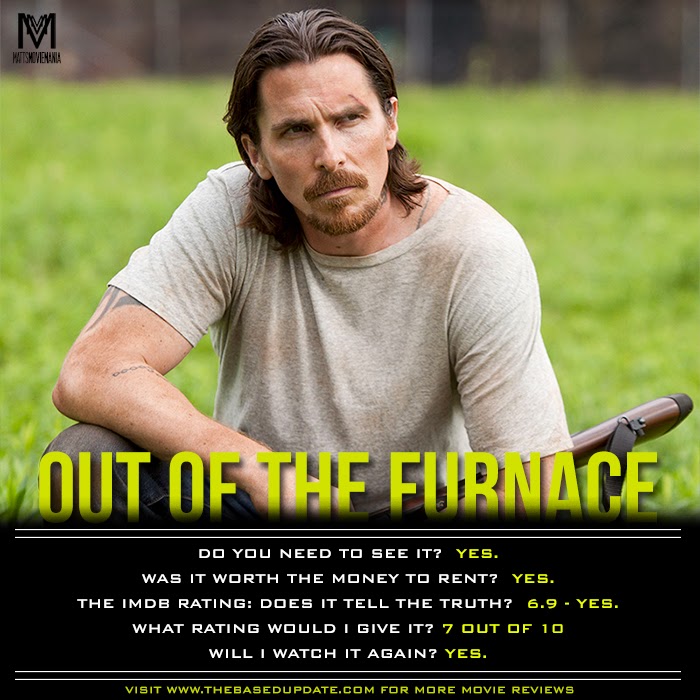 Russell and his younger brother Rodney live in the economically-depressed Rust Belt, and have always dreamed of escaping and finding better lives. But when a cruel twist of fate lands Russell in prison, his brother becomes involved with one of the most violent and ruthless crime rings in the Northeast – a mistake that will cost him everything. Once released, Russell must choose between his own freedom, or risk it all to seek justice for his brother.

“Life is cheap in Braddock, Pa., a boarded-up rust-belt town of closing steel mills and busted dreams. The only thing left to count on is family. That’s the message that Scott Cooper’s Out of the Furnace returns to with harrowing frequency and force. Like 1978’s The Deer Hunter, Cooper’s devastating death trip nails the bond between two no-hope men pushed to violent extremes. Christian Bale’s Russell is a decent ex-con who can’t catch a break. Casey Affleck’s Rodney is his scarred younger brother, who’s just back from Iraq and is easy prey for Harlan DeGroat (Woody Harrelson), a skeevy sadist who dangles quick cash to get Rodney to brawl in a bloody bare-knuckle fight. When Rodney vanishes, Russell follows his trail deep into the Appalachians to make DeGroat pay. All of the actors are remarkable. But it’s Bale, and his almost biblical quest for justice, who burns his way into your soul.” -Chris Nashawaty