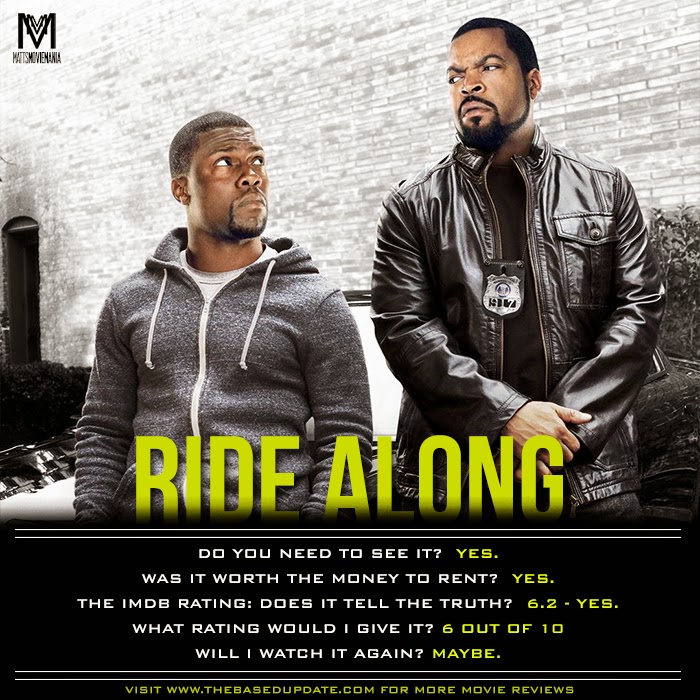 Security guard Ben must prove himself to his girlfriend’s brother, top cop James. He rides along James on a 24-hour patrol of Atlanta.

For the past two years, high-school security guard Ben has been trying to show decorated APD detective James that he’s more than just a video-game junkie who’s unworthy of James’ sister, Angela. When Ben finally gets accepted into the academy, he thinks he’s earned the seasoned policeman’s respect and asks for his blessing to marry Angela. Knowing that a ride along will demonstrate if Ben has what it takes to take care of his sister, James invites him on a shift designed to scare the hell out of the trainee. But when the wild night leads them to the most notorious criminal in the city, James will find that his new partner’s rapid-fire mouth is just as dangerous as the bullets speeding at it.

“Turns out to be something like a comic riff on “Training Day.” Leaning more toward Hart’s brand of slightly raunchy humor rather than Ice Cube’s equally popular family-friendly fare, the PG-13 film exhibits broad appeal.” -Justin Lowe

“Hart’s exasperated dervish shtick has moments of real live-wire anarchy, including one priceless gag at a firing range. Will it be enough to make Hart a household name? Maybe. But both he and his fans deserve better.” -Chris Nashawaty