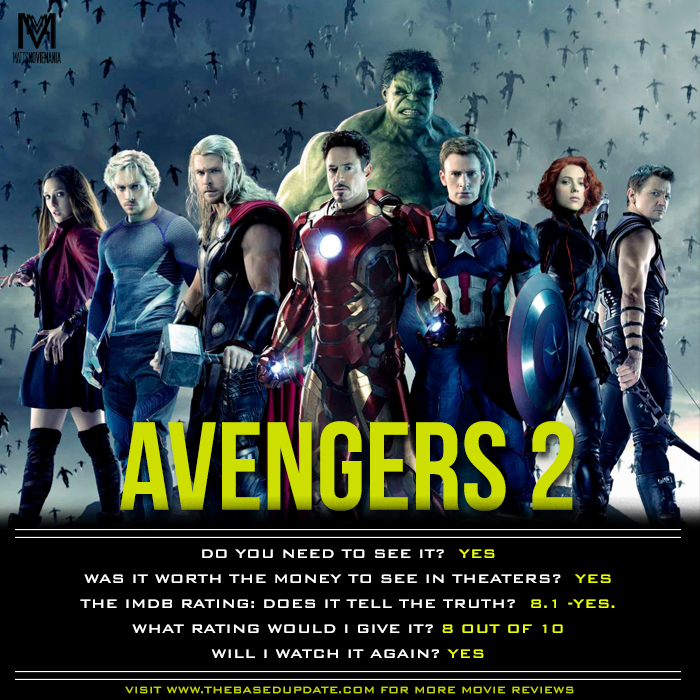 When Tony Stark and Bruce Banner try to jump-start a dormant peacekeeping program called Ultron, things go horribly wrong and it’s up to Earth’s Mightiest Heroes to stop the villainous Ultron from enacting his terrible plans.

When Tony Stark tries to jumpstart a dormant peacekeeping program, things go awry and Earth’s Mightiest Heroes, including Iron Man, Captain America, Thor, the Incredible Hulk, Black Widow and Hawkeye, are put to the ultimate test as the fate of the planet hangs in the balance. As the villainous Ultron emerges, it is up to the Avengers to stop him from enacting his terrible plans, and soon uneasy alliances and unexpected action pave the way for a global adventure
“Bigger and, yes, darker than the first, this is less air-punchingly gleeful but probably more consistent. Thanks to Whedon and the most charismatic, compelling cast you’ll find anywhere, Age of Ultron redefines the scale we can expect from our superhero epics but still fits human-sized emotion amid the bombast.” -Helen O’Hara

“This is a movie that is almost exhaustingly large-scale, and Ultron’s ultimate plan involves a crazy visual idea that Whedon makes sort of beautiful and eerie. It’s got so much action that I’m going to bet some audiences go numb after a while. But in scene after scene, there are beats and stunts and poses that suggest that an army of comic book fanatics worked on this movie.” -Drew McWeeny