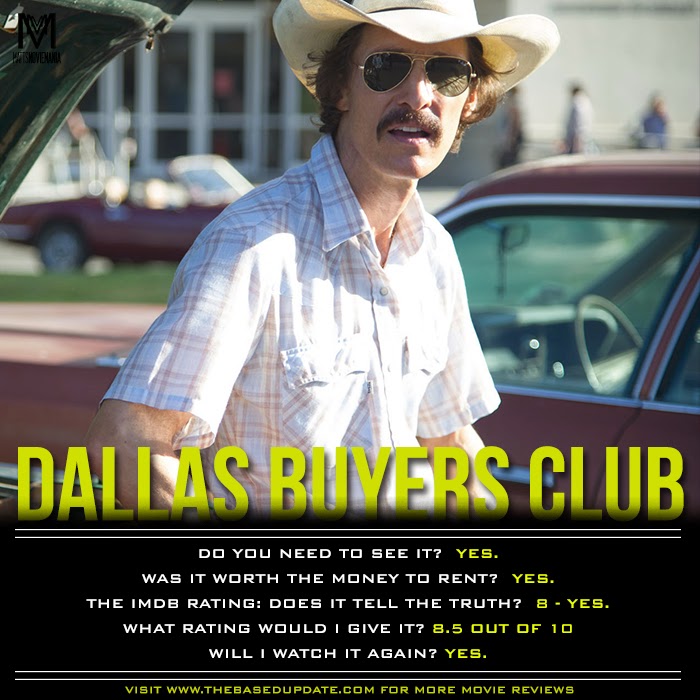 Dallas 1985, an electrician and sometimes rodeo bull rider Ron Woodroof lives hard, which includes heavy smoking, drinking, drug use and casual sex. While in the hospital on a work related injury, the doctors discover and inform him that he is HIV+, and that he will most-likely die within thirty days. Ron is initially in angry denial that he would have a disease that only “faggots” have, but upon quick reflection comes to the realization that the diagnosis is probably true. He begins to read whatever research is available about the disease, which at this time seems to be most effectively treated by the drug AZT. AZT, however, is only in the clinical trials stage within the US. Incredulous that he, as a dying man, cannot pay for any drug which may save or at least prolong his life, he goes searching for it by whatever means possible.

“Losing 50 pounds for the role, Mr. McConaughey looks like a cadaver as he more than gives his all for his art. His shocking weight loss is the first thing you’ll notice, but he grows on you in sensitivity and stature. Jennifer Garner is fine as the sympathetic doctor who risks her own career to help him. But it is Jared Leto—fearless, funny, openhearted, sympathetic and totally believable as the transsexual who opens Woodroof’s eyes to people and lifestyles he cannot begin to understand—who literally steals the picture. What a performance from an actor who grows in stature every time out of the starting gate. Meticulously researched by writers Craig Borten and Melisa Wallack (the actual Ron Woodroof was a consultant, contributing hours of taped interviews before he died in 1992) and directed by Canadian Jean-Marc Vallée with a refreshing, no-nonsense lack of sentiment, Dallas Buyers Club represents the best of what independent film on a limited budget can achieve—powerful, enlightening and not to be missed.” -REX REED