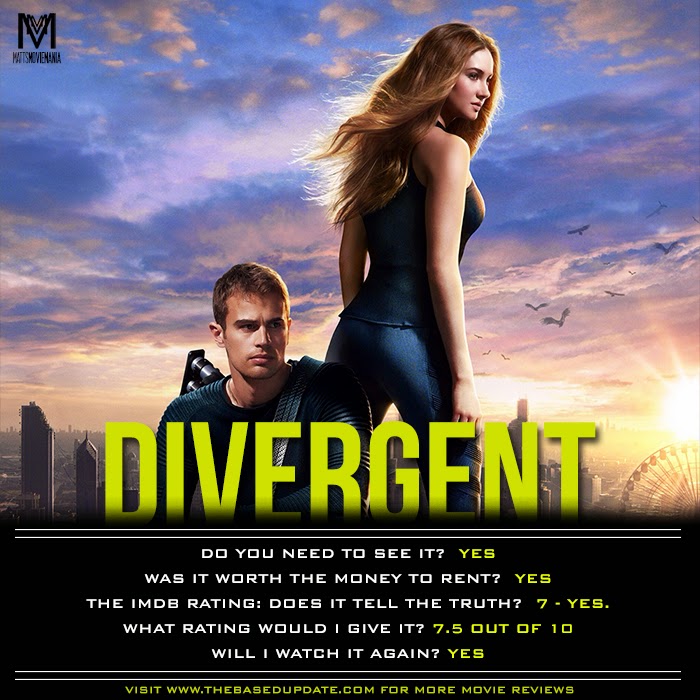 In a world divided by factions based on virtues, Tris learns she’s Divergent and won’t fit in. When she discovers a plot to destroy Divergents, Tris and the mysterious Four must find out what makes Divergents dangerous before it’s too late.

Set in a futuristic dystopia where society is divided into five factions that each represent a different virtue, teenagers have to decide if they want to stay in their faction or switch to another – for the rest of their lives. Tris Prior makes a choice that surprises everyone. Then Tris and her fellow faction-members have to live through a highly competitive initiation process to live out the choice they have made. They must undergo extreme physical and intense psychological tests, that transform them all. But Tris has a secret that she is Divergent, which means she doesn’t fit into any one group. If anyone knew, it would mean a certain death. As she discovers a growing conflict that threatens to unravel her seemingly perfect society, this secret might help her save the people she loves… or it might destroy her.
“Woodley, through the delicate power of her acting, does something compelling: She shows you what a prickly, fearful, yet daring personality looks like when it’s nestled deep within the kind of modest, bookish girl who shouldn’t even like gym class.” -Own Gleiberman

“What about those who haven’t read the book? Divergent, the movie, still offers a smart, spunky, sympathetic heroine, a hunky love interest and a sobering if rather obvious message about the value of being true to oneself rather than mindlessly conforming.” -St. Louis Post-Dispatch

“This is a Noah for the 21st century, one of the most dazzling and unforgettable biblical epics ever put on film.” -Richard Roeper