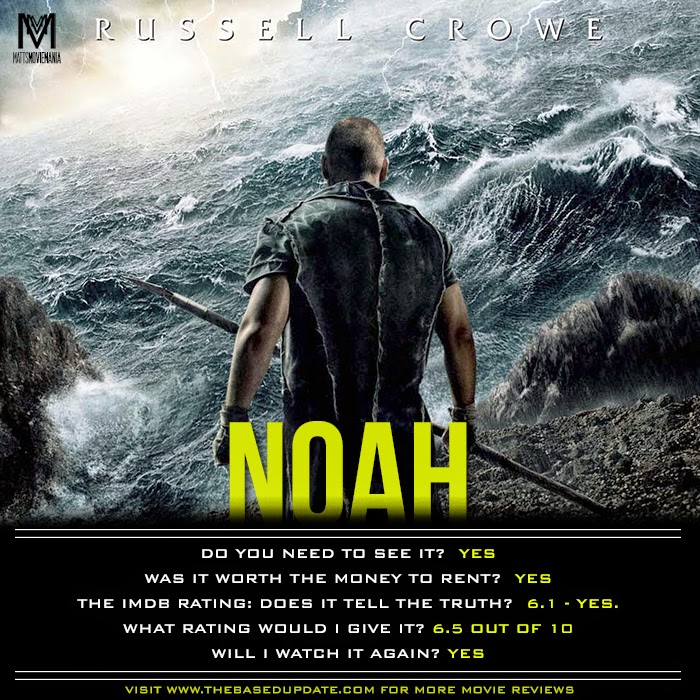 A man is chosen by his world’s creator to undertake a momentous mission before an apocalyptic flood cleanses the world.

Darren Aronofsky brings the story of Noah’s Ark to the big screen with this Paramount/New Regency production. “In the beginning, there was nothing.” So starts this version of the story centered on Noah (Russell Crowe), the man entrusted by God to save the innocent animals of Earth as the rising floodwaters cleansed the planet of mankind’s evil. As the telling continues, we learn how Adam and Eve’s sins have passed down through generations through their sons Cain and Abel, and how the descendants of their righteous sibling Seth were entrusted with defending creation. One day, while foraging in the country, a descendant of Seth, Noah, sees his father slain by a descendant of Cain. In the process, Noah’s birthright is stolen from him.

Decades later, as a father of three, Noah experiences a vision foretelling the great flood that will wash over the Earth, destroying every living thing that stands on the soil. That vision leads Noah to seek out his grandfather, Methuselah, in order to understand his mission. When a second vision reveals that Noah is to construct a massive ark designed to shelter every living animal during the great flood, Noah, his wife Naameh (Jennifer Connelly), their three sons Shem (Douglas Booth), Ham (Logan Lerman), and Japheth (Leo McHugh Carroll), and their adoptive sister Ila (Emma Watson) immediately begin construction on the vessel with the help of the Watchers, a race of angels created as beings of light, but encrusted in stone and mud and forsaken by God for their attempts to help man. Meanwhile, word of Noah’s work soon reaches Tubal Cain (Ray Winstone), who gathers an army on a mission to overtake the ark, and survive the coming storm by any cost.
“Darren Aronofsky wrestles one of scripture’s most primal stories to the ground and extracts something vital and audacious, while also pushing some aggressive environmentalism, in Noah.” -Todd McCarthy

“This is a Noah for the 21st century, one of the most dazzling and unforgettable biblical epics ever put on film.” -Richard Roeper