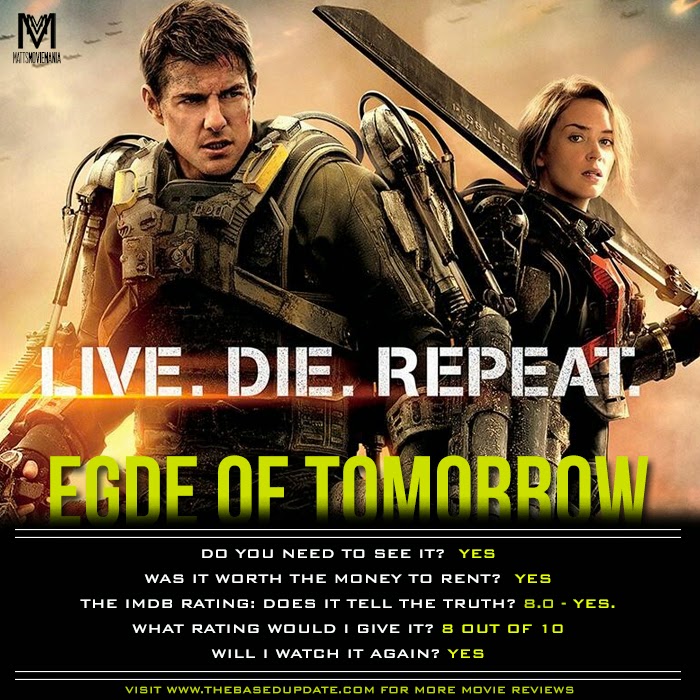 A military officer is brought into an alien war against an extraterrestrial enemy who can reset the day and know the future. When this officer is enabled with the same power, he teams up with a Special Forces warrior to try and end the war.

An alien race has hit the Earth in an unrelenting assault, unbeatable by any military unit in the world. Major William Cage (Cruise) is an officer who has never seen a day of combat when he is unceremoniously dropped into what amounts to a suicide mission. Killed within minutes, Cage now finds himself inexplicably thrown into a time loop-forcing him to live out the same brutal combat over and over, fighting and dying again…and again. But with each battle, Cage becomes able to engage the adversaries with increasing skill, alongside Special Forces warrior Rita Vrataski (Blunt). And, as Cage and Vrataski take the fight to the aliens, each repeated encounter gets them one step closer to defeating the enemy!
“Edge of Tomorrow is the ultimate metaphor about Tom Cruise’s career. You can’t kill this guy. He’ll just keep coming. And he remains arguably the biggest movie star in the world for a reason. He brings it.” -Richard Roeper

“The reason the film works is because it throws everything into the blender and comes up with something new, something that has a great lively sense of wit and humor to it, and it takes the time to fully explore its wild premise fully.” -Drew McWeeny