The newest segment to The Based Update is entitled: Matt’s Movie Mania. A regular post will show movie info up top along with a graphic and then after the jump I will give a critic review that I think sums it up properly. As you learned from my hint about this feature, I want it to be simple and to the point without it wasting all your time (which is what I believe most critics do.) I hope you guys enjoy this and hit the jump to see all the details in full.

I tried to think of the most simple questions and answers without boring you on and on about things you do not care about. So, the first question is going to be “Do you need to see it?” If a friend or family member tells you that you should see a certain movie, chances are you will because you trust their recommendation. I want you to see me as your friend and until I prove you wrong, TRUST MY RECOMMENDATION.

The second question is going to be, “Was it worth the money to rent?” Even though Redbox is only a buck, this question sits more on: was it worth your time to go and rent it, watch it & return it? Simple, but very important when you think about it.

The third question will be, “The IMDB Rating: Does it tell the truth?” IMDB, in my opinion has the most accurate scores when it comes to movies because they take all the ratings from all their users and combined it into one score. In this question I will give you the score and let you know if it is accurate in my opinion. The way I will use this for yes or no reference is if the score falls within 1 full point of my rating either way. For example, if I watch a movie that has a rating of 7.1, that means if my rating is between 6.1 and 8.1 I believe it holds an accurate score.

The fourth question will be a follow up to the third, “What rating would I give it?” Simple, here I will give you the rating on what I think the movie was on a scale of 1 to 10 without crazy decimals, just a complete number with, at most a .5 added or subtracted for a score.

The fifth and final question will be, “Will I watch it again?” This is the final question for a reason, and it’s almost the most important. When you are finally done watching a movie, within split seconds you know if you would watch it again or not. I have watched great movies that I have only seen once and then in comparison I have watched other movies that were not as good multiple times. It really doesn’t make sense, but we all have our own outlooks on our favorite movies and as an extra bonus to these upcoming reviews I will let you know if I would spend the time to watch the movie again.

Here is an example of the way these graphics will look: Simple and to the point. I hope you share them as I post them. 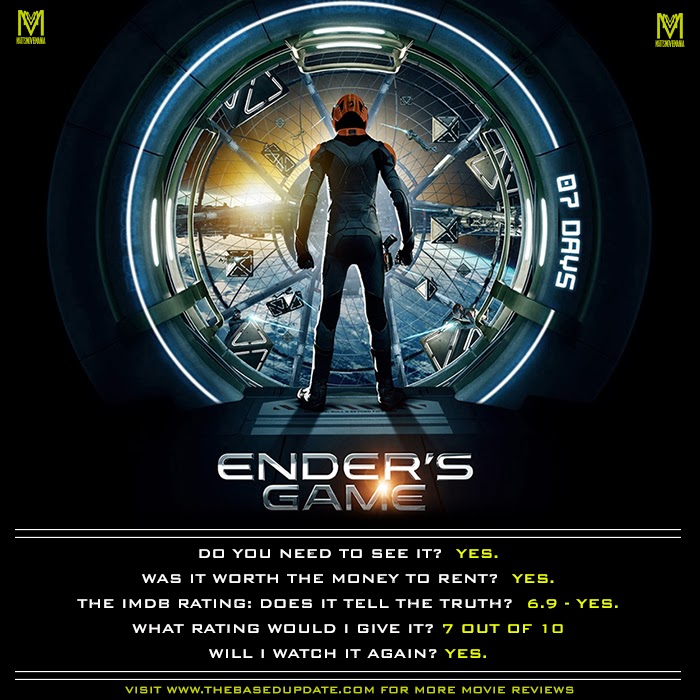 FYI: The movies I will be reviewing are not stationary to one genre. These reviews will span from blockbusters, independent movies, foreign movies, animated movies and beyond. Literally sky is the limit when it comes to what I watch as you will see. Also, as I start these reviews they will be when I rent them through Redbox, so they will not be brand new aka not right when they hit theaters. Theater reviews will come in the future, for now they will be DVD releases.