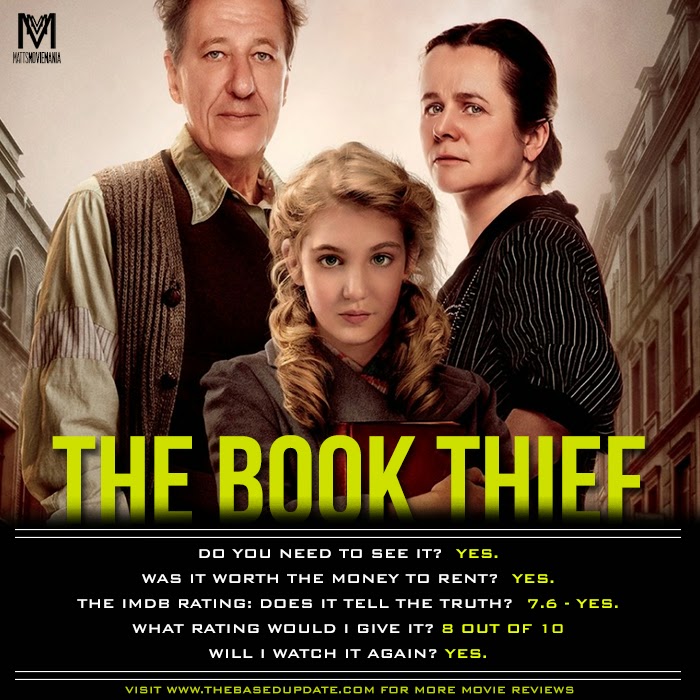 While subjected to the horrors of World War II Germany, young Liesel finds solace by stealing books and sharing them with others. In the basement of her home, a Jewish refugee is being sheltered by her adoptive parents.

In 1938, the young girl Liesel Meminger is traveling by train with her mother and her younger brother when he dies. Her mother buries the boy in a cemetery by the tracks and Liesel picks up a book, “The Gravediggers Handbook”, which was left on the grave of her brother and brings it with her. Liesel is delivered to a foster family in a small town and later she learns that her mother left her because she is a communist. Her stepmother, Rosa Hubermann, is a rude but caring woman and her stepfather, Hans Hubermann, is a simple kind-hearted man. Liesel befriends her next door neighbor, the boy Rudy Steiner, and they go together to the school. When Hans discovers that Liesel cannot read, he teaches her using her book and Liesel becomes an obsessed reader. During a Nazi speech where the locals are forced to burn books in a bonfire, Liesel recovers one book for her and the Major’s wife Ilsa Hermann witnesses her action. Meanwhile Hans hides the Jewish Max Vandenburg, who is the son of a deceased friend that saved his life in the war, in the basement of his house and Liesel becomes his friend. One day, Rosa asks Liesel to deliver laundry to the Major and Ilsa invites Liesel to go to her library and tells that she can visit her to read whenever she wants. But in times of war there are many threats and the lives of Liesel, her family and friends will never be the same.

“Clocking in at a little more than two hours, “The Book Thief” moves too deliberately at times. Still, this is one of the best movies of the year, featuring one of the most perfect endings of any movie in recent memory.” -Richard Roeper