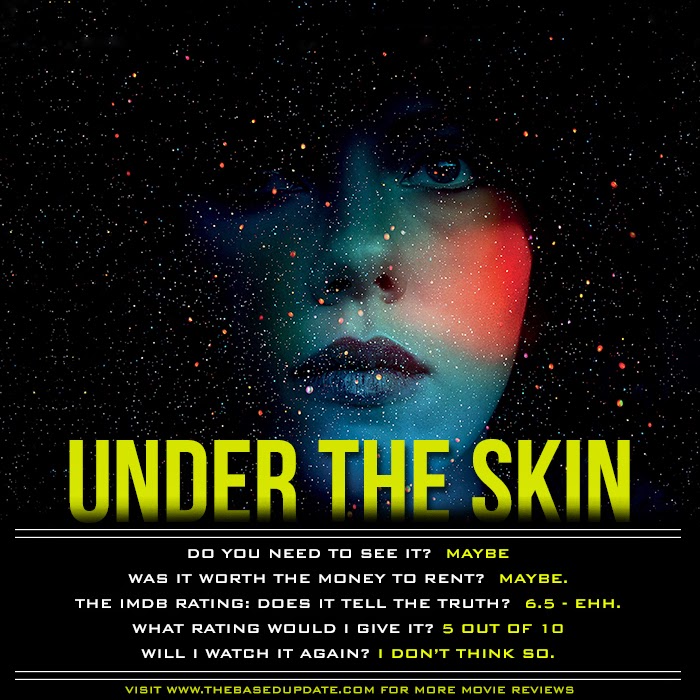 A mysterious woman seduces lonely men in the evening hours in Scotland. Events lead her to begin a process of self-discovery.

A voluptuous woman of unknown origin combs the highway in search of isolated or forsaken men, luring a succession of lost souls into an otherworldly lair. They are seduced, stripped of their humanity, and never heard from again. Based on the novel by Michael Faber, this film examines human experience from the perspective of an unforgettable heroine who grows too comfortable in her borrowed skin, until she is abducted into humanity with devastating results.

Let me just go in and say that this week I have watched some out of this world movies. This movie, once again, you will either love or hate. No answers are really given, there are a lot of prolonged scenes of no words and borderline emptiness and confusion. Now while my rating is a little low, it shouldn’t bar you from watching this. I really need to watch it again because I know it’s better than what I rated it as. I am fan of movies that are way out there and this one is way out there.“A totally wacky head-trip with midnight movie sensibilities and a daring avant garde spirit, Glazer’s movie is ultimately too aimlessly weird to make its trippy narrative fully satisfying, but owes much to Johansson’s intense commitment to a strangely erotic and unnerving performance unlike anything she has done before.” -Eric Kohn

“What’s under the film’s surface is intriguing enough, but it’s the surface itself that holds you in a dark trance. A portrait of alienation filmed from the alien’s point of view – or is it just a woman’s? – the movie’s a cinematic Rubik’s Cube that snaps together surprisingly easily, yet whose larger meanings remain tantalizingly out of reach.” -Ty Burr