#MattsMovieMania A Most Wanted Man 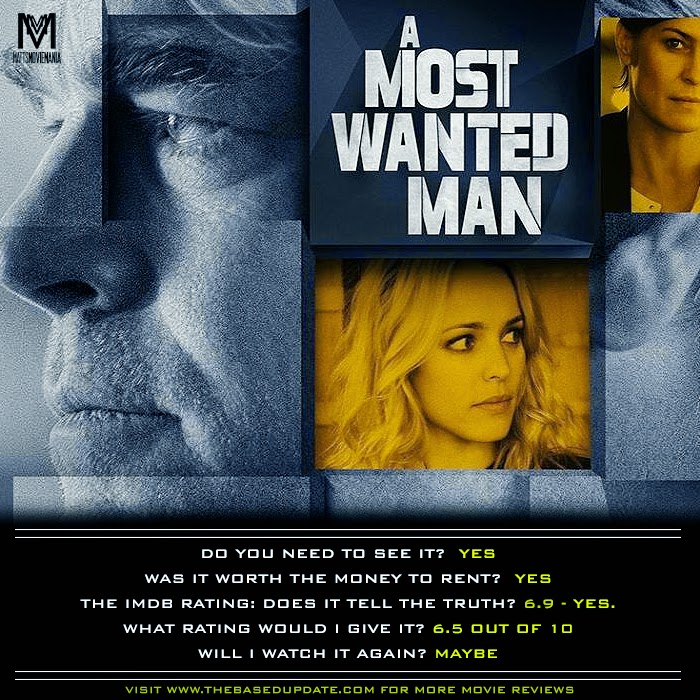 A Chechen Muslim illegally immigrates to Hamburg, where he gets caught in the international war on terror.

When a half-Chechen, half-Russian, brutally tortured immigrant turns up in Hamburg’s Islamic community, laying claim to his father’s ill gotten fortune, both German and US security agencies take a close interest: as the clock ticks down and the stakes rise, the race is on to establish this most wanted man’s true identity – oppressed victim or destruction-bent extremist? Based on John le Carré’s novel, A MOST WANTED MAN is a contemporary, cerebral tale of intrigue, love, rivalry, and politics that prickles with tension right through to its last heart-stopping scene.
“A Most Wanted Man is simply a complex tale superbly told, with time for nuance and to soak in its mysteries.” -Allan S.

“Every move Hoffman makes subtly rivets attention. There’s the uncanny German accent, the boozing, the chain-smoking, the glances at his assistant (Nina Hoss), the secret life he keeps hidden and the betrayals even Gu?nther can’t see coming. Hoffman is simply magnificent. Face it. We won’t see his like again.” -Peter Travers