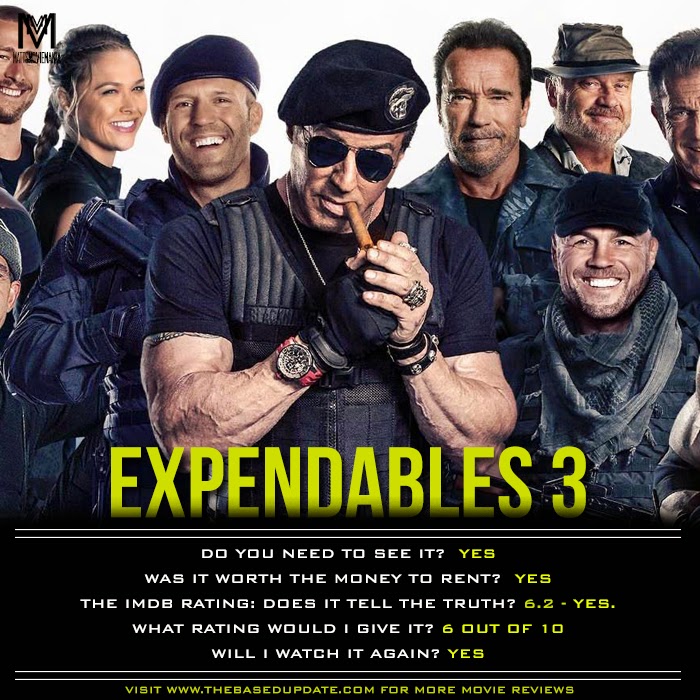 Barney augments his team with new blood for a personal battle: to take down Conrad Stonebanks, the Expendables co-founder and notorious arms trader who is hell bent on wiping out Barney and every single one of his associates.

Barney (Stallone), Christmas (Statham) and the rest of the team comes face-to-face with Conrad Stonebanks (Gibson), who years ago co-founded The Expendables with Barney. Stonebanks subsequently became a ruthless arms trader and someone who Barney was forced to kill… or so he thought. Stonebanks, who eluded death once before, now is making it his mission to end The Expendables — but Barney has other plans. Barney decides that he has to fight old blood with new blood, and brings in a new era of Expendables team members, recruiting individuals who are younger, faster and more tech-savvy. The latest mission becomes a clash of classic old-school style versus high-tech expertise in the Expendables’ most personal battle yet.
“It is forgettable fluff, but well-delivered, and it suggests that they’ll be able to keep making these as long as they can prop up the cast, and with the younger generation making a decent showing this time out, they may even be able to hand it off when the time comes.” -Drew McWeeny

“It’s a preposterously overstuffed strategy that, go figure, not only works, but even cures a thing or two that ailed the previous movies.” -Tom Russo