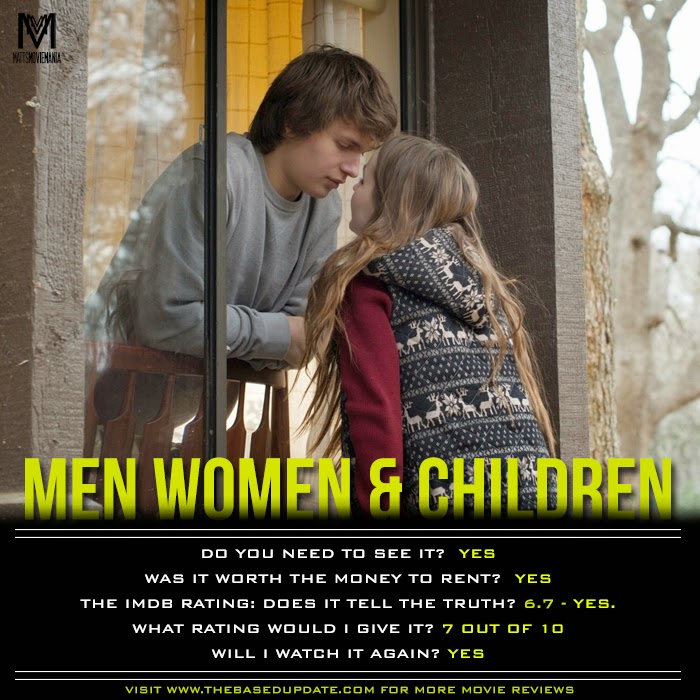 A group of high school teenagers and their parents attempt to navigate the many ways the Internet has changed their relationships, their communication, their self-image, and their love lives.

Men, Women and Children follows the story of a group of high school teenagers and their parents as they attempt to navigate the many ways the internet has changed their relationships, their communication, their self-image, and their love lives. The film attempts to stare down social issues such as video game culture, anorexia, infidelity, fame hunting, and the proliferation of illicit material on the internet. As each character and each relationship is tested, we are shown the variety of roads people choose – some tragic, some hopeful – as it becomes clear that no one is immune to this enormous social change that has come through our phones, our tablets, and our computers.
“Jason Reitman’s new film skillfully navigates through the personal melodramas of many characters with a nice sense of balance and a sharp appreciation of generational differences.” -Todd McCarthy

“At times Reitman (adapting Chad Kultgen’s 2011 novel) can be a bit preachy and scolding about the pitfalls of surrendering one’s “RL” (real life) to one’s online existence, but just about any parent or any teenager seeing this film will empathize with any number of the interconnecting plot lines.” -Richard Roeper